how many calories in a tablespoon of olive oil featured image

How Many Calories in a Teaspoon of Olive Oil? (What about Kalamata olive oil and Extra Virgin?)

There are 40 calories in a teaspoon of olive oil, which roughly measures 4.5g.

Olive oil is known to be a particularly healthy oil due to its monounsaturated properties.

Additionally, Olive oil contains some other beneficial qualities for people with health concerns.

But what about other types of olive oil? Are there any differences in the health benefits and nutrition between these different blends and derivatives?

Saturated fat may differ between various olive oils, however, when it comes to calories, you might just be surprised.

How many calories are in a teaspoon of extra virgin olive oil?

There are 40 calories in 1 tsp of extra virgin olive oil. The calories in this type are exactly the same when it comes to the nutrition facts.

The difference between extra virgin olive oil and other types is that this oil is cold-pressed from olives.

There’s no heat or chemical processes. This means it’s often seen as some of the most natural oil you can buy.

It’s also considered some of the healthiest, great for a control diet (if you want to add an oil type), and with less total fat than a lot of harmful cooking aids, such as pure lard.

How many calories are in a teaspoon of Kalamata olive oil?

Kalamata oil contains 40 calories in a 4.5-gram teaspoon. This is the same as for other olive oil.

Kalamata oil comes from the olive groves in southwestern Greece. They are often referred to as the Queen of olives.

Kalamata oil has worldwide acclaim as being one of the best, if not the best, oil in the world! This oil, like other olive oils, is produced from pressing olives.

That’s why – again – you can expect there to be around 40 calories in a teaspoon.

There’s actually very little difference when it comes to the calories provided by olives, but if you are on a diet, it’s just as well checking up the nutrition facts. 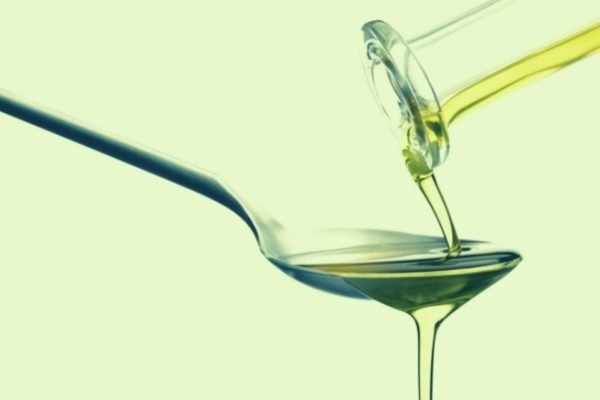 How many calories are in 2 tablespoons of olive oil?

There are 240 calories in two tablespoons of olive oil.

When working in teaspoons and tablespoons to measure oil, instead of weight, be sure to multiply the number of calories in a teaspoon by three.

A two tablespoon serving tends to be a healthy amount for most cooking, but of course, that depends on how many people are eating dinner that evening!

You might want to up the oil if you’re cooking more food, but of course, the calorie count will increase.

How many calories are in 3 tablespoons of olive oil?

There are 360 calories in three tablespoons of olive oil.

This, again, is because there are roughly 120 calories per tablespoon serving, or three times that which you might find in a tsp serving.

Note, again, three tablespoons of oil will likely give you enough to cook a good size meal, but don’t forget that you may need more if your serving size is particularly large.

Whether you are preparing a salad or cooking a steak, olive oil helps food to go down that little bit easier.

How many calories in 4 tablespoons of olive oil?

In four tablespoons of olive oil, there are 480 calories.

Be careful loading up on this amount of fats when adding to your food – the calories are stacking up, and while there are plenty of heart-healthy ingredients – and while it may be a great antioxidant – too many calories can never be a good thing.

Is 2 tablespoons of olive oil a day too much?

That all depends on what you are using it for, the serving size of what you eat, and what else your diet consists of.

Of course, you will also need to consider your fitness – if you are burning off more calories than what you consume each day, then you can expect to see weight loss in the long term.

Olive oil can add a lot of flavour to a dish, and is a great source of vitamin K. However, as with just about any type of food, healthy or otherwise, too much intake can cause problems.

Take this amount of oil if you’re interested in the anti-inflammatory properties, but if you are on a dietary regime, maybe cut back a little each day as fat contains the highest calorie amount per gram and olive oil is mostly monounsaturated fat.

There is no yes or no answer to this – it just depends on your overall diet and intake.

Two tablespoons is absolutely fine and perfectly healthy as part of a calorie-controlled diet, but if you’re over-consuming calories in general, an extra two tablespoons of any oil will not help matters, regardless of how healthy olive oil is.